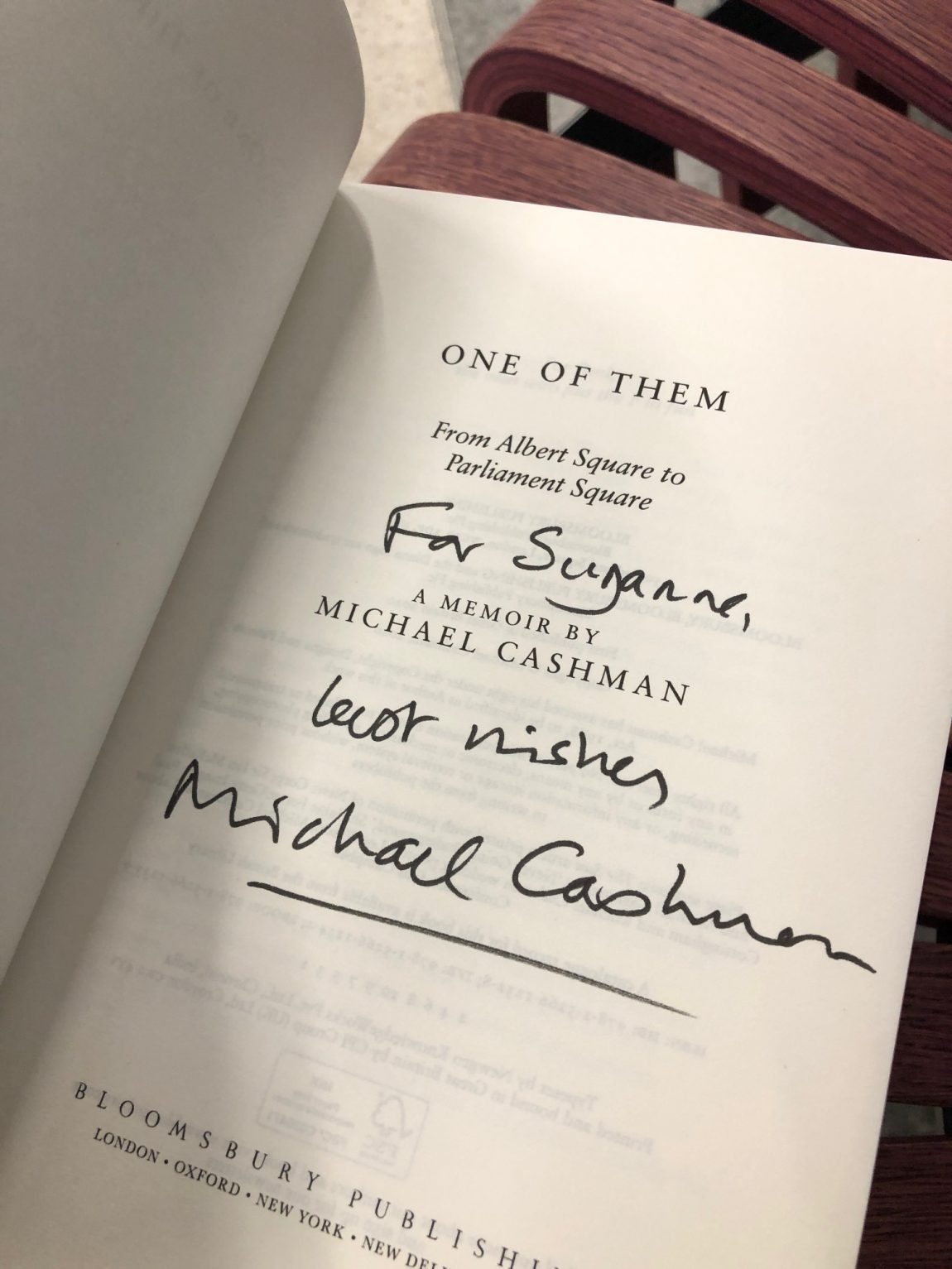 Blog – on being an ally

He was asked at one point about the importance of allies during the Section 28 protests and he replied (and I paraphrase): “…we don’t walk ahead, we don’t walk behind, we walk together.” In other words, allies stand shoulder to shoulder with you. They walk beside you, and speak up with, or for, you.

My first ‘act’ of allyship came in 1987, before I had any concept of what being an ally was. I wrote to Lord Cashman after my father died. I cringed a bit today when I heard Lord Cashman talk about the language allies used back then as it reflected exactly how I think I’d started the letter: “I’m not gay but…”

At that time, Ronald Reagan was president of the United States. Curiosity Killed the Cat were making teenagers scream across the UK. Madonna was singing about La Isla Bonita. Terry Waite had just disappeared in Beirut. In February that year, Edwina Currie proclaimed that “good Christians don’t get AIDS.” By August, one person a day was dying of AIDS in the UK alone.

“It was the era of Section 28 and adverts featuring tombstones.”

My dad’s death occurred at the very peak of negative sentiment towards LGBT+ people. It was the era of Section 28 and adverts featuring tombstones. And while my sister and I received nothing but sympathy, and a huge outpouring of love and loss for my dad, I could clearly see that the opposite was happening when it came to people with AIDS.

I could see the world crashing in on LGBT+ people – there was little sympathy, but rather blame; no kindness, only vilification. And my 16 year old self didn’t understand it. I was obviously in some way channelling my own grief, and needed to try to focus on making something good out of the bad. And so I reached out and asked what can I do?

A couple of days later, a BBC-stamped envelope plopped through the letter box. “You have a letter from the BBC!” my mother shouted up the stairs. A letter?! But where was the activist toolkit I’d asked for? The posters I’d requested from Michael to bring attention to the cause – and also cover up the awful portrait Gary Barlow had done of me that hung in the school foyer forcing me to look at a badly drawn version of myself EVERY DAY. (That’s one for another blog.)

In the envelope was a photo of Michael and a very lovely note thanking me for my kind words, but understandably stopping short of supplying an over-excited northern teenager with a DIY protest kit.

I became a more conscious ally two years later when a close school friend visited during the uni holidays and came out to me. A year later at university another friend came out to me. A year after that I met a guy, we went on a date, and six weeks later he tried desperately not to come out to me when I spotted him in a gay bar with his soon-to-be boyfriend. (We’re still friends today.) A year after that, I supported my closest friend and flatmate as he came out to his parents. Though responding calmly to the news, they asked him as a Christian to please “not act on it”. (I’m happy to report that today he’s very much still acting on it and they are fine with it.)

In 1996, two of the abovementioned chaps and I went to our first Pride march. It made me laugh today to hear Lord Cashman’s description of his own first Pride march as it resonated. I remember us excitedly and nervously getting ready in someone’s flat in Berwick Street. Hitting the streets to march we were flanked by police, and very much looked at as an oddity. And we enjoyed it.

Completely by accident I found myself at a Worlds AIDS Day vigil in NY in December 1996 which was a lot less celebratory.

At the time I wanted to work in broadcast journalism, and did a short stint at the Radio 5 programme, Out This Week, writing and posting a letter to Ian McKellen to get a quote because email didn’t exist yet. On broadcast day I was sharply reprimanded by Angela Mason, (then director of Stonewall), because I hadn’t briefed her on what Ian McKellen had said, and subsequently drowned my sorrow at my own ineptitude with Peter Tatchell later that night in Heaven.

And then, around 1997/98, my allyship was quieted. Not because it had gone away, but because I started working in investment management, and the world was suddenly very different. Gone were the mix of academics and writers and designers I’d been working with to date – in a world where people were just ok with being all kinds of people. And in their place was a world of predominantly straight, white men who all sounded and dressed the same. There was no one to be an ally to. No one was out in that world then; inclusion and diversity barely rated a mention, women were there but not senior, and people of colour were rare.

Over the following 20 years things have certainly shifted, but in 2020 I find my allyship back in full swing and – I think – still very much needed. And this is why.

“I realised with horror that he was stumbling through it because he was trying not to disclose the gender of his date.”

We didn’t know each other terribly well but we were working together a lot. One day I went to his desk and he was on his phone ‘arranging a date’. Ooh tell me about it! I demanded. And as he did, in an awkward, fractured way, I realised with horror that he was stumbling through it because he was trying not to disclose the gender of his date.

A few weeks and bottles of wine later, that barrier was well and truly broken down between us, but the next step was to break the barrier between him and the rest of the firm.

Deon was asked to chair the firm’s LGBT+ network. While it had been functioning for a while, a big re-launch event was planned. At the network launch event, along with some brilliantly incongruous, filthy jokes from rugby player Gareth Thomas, Deon broadcast a short film telling his story. It turns out he’d been outed at work – at that very firm – a few years earlier. I had no idea.

You could feel the shock reverberating around the room as his close-up filled the screen, bluntly edited to remove the tears that he couldn’t stop during the filming. And it was one of the bravest things I’ve seen anyone do: to put yourself up on screen in front of your peers and senior management, and show your vulnerability and pain in that way.

And it was that short film and his bravery that retriggered my allyship and made me realise that even though the world seems like a better place than it was when I was 16, grown men (and women) were still being bullied like children in a playground in their place of work. And it’s not ok.

We’ve worked together through the network and latterly InterInvest for a couple of years now and I watch as he continues to strive for equality while I work to amplify the work that he and the rest of the wonderful InterInvest team does.

And it was through that connection that we ended up in a room today listening to Lord Michael Cashman talk about allyship during the era in which it all began for me.

So what now? We are into our second formal year as InterInvest. I was heartened to hear Lord Cashman talk about the first days of Stonewall and how a staff of one has now become around 110. Imagine where we could be in 20 years!

InterInvest continues on our mission to enable and encourage investment firms to bring about real change around LGBT+ inclusion and diversity, and I’ll continue to march alongside as long as I’m useful and needed.

To increase the number of allies, and allies with influence, we need inspirational orators and leaders to help us break out of our echo chambers. We need more financial backing from firms to support all the voluntary work that goes on in the inclusion space. And I would really like to see that voluntary work being formally recognised and acknowledged in the workplace to encourage more of it.

Because without people like us giving freely of our time and skills we’re more likely to slide back to a world where there’s moral outcry over a gay kiss on EastEnders as opposed to celebrating the production of a Pride-themed episode. Which incidentally is being worked on at the moment. Petition to get Lord Cashman back for another episode anyone?